After Only Having Boys, They Try For A Girl “1 Last Time,” End Up With Quintuplets Instead 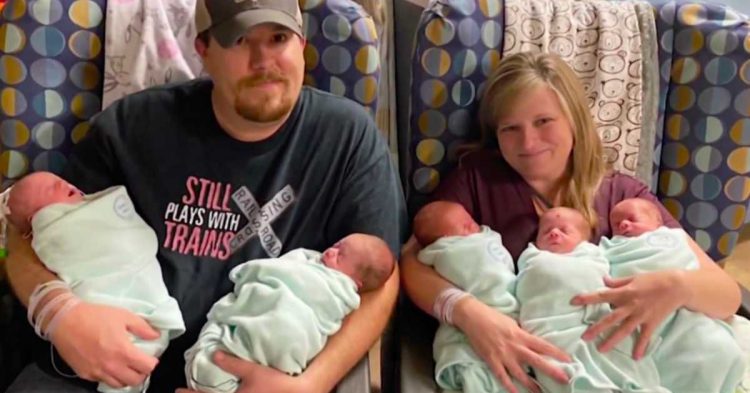 Joshua and Megan Hulen wanted one thing more than anything in the world – a daughter. Although they had sons, they were eager for some more estrogen in the family unit – at least that’s what Megan wanted. So, when the couple decided to try for a girl “one last time,” they got down to business. Soon, Megan was pregnant and excited to see if she was carrying a girl or a boy.

When the doctors were able to get enough information about her pregnancy, they told Megan and Joshua that she wasn’t pregnant with just one baby – but five. She was going to deliver quintuplets, which would instantly transform the Hulen family from a family of four to a family of nine!

“They did not come from IVF,” Megan said with a laugh when interviewed by WKRG. Her husband quickly added, “And they’re not COVID babies. It was before” the pandemic turned their lives upside down.

Megan loved that the pregnancy got started before the pandemic because it allowed Joshua to join her for some of the early appointments. Those appointments were instrumental because it got the family together and unified around the immense challenge that was about to turn their lives upside down. Not only was Megan pregnant with five babies at the same time, but the family would also need to battle the coronavirus pandemic and deal with shutdowns.

“It’s been really crazy, something we never expected, for sure,” said Megan.

Before the pregnancy, the Hulens had two boys, one seven-year-old and one two-year-old. They were desperate for a girl and decided to try one last time to see if their wish would come true.

The couple first went down the fertility route. But doctors noticed some problems and canceled all further treatments. It was a good thing they did because Megan was ready to bring five new lives into the world.

“Went to our first ultrasound at six weeks and found out that there were five,” Megan said.

Chloe, Adam, Emma, Allison, and Madison were born on September 2, at 32 weeks.

Joshua said, “It’s miraculous but overwhelming all at the same time.”

The quintuplets shocked the doctors as well as the parents.

“They’re not viable, or one or two vanish, or those types of things happen,” Megan said. “And so we thought, ‘OK, there’s not going to be five. There’s going to be two, three, or something. We went back after a week, and there were five heartbeats.”

Not only was the pregnancy a one in 43 million chance, but the babies were also the first quintuplets to be born in North Dakota.

Jacob, the babies’ big brother, said: “I’m glad to be home, and it’s just amazing because you know, this has never happened.”

Megan said, “We’re super excited and happy to have a big family. It’s bigger than what we anticipated, but…”

“We’re blessed, and we’re happy about it,” Megan continued.

Joshua laughed, agreeing: “Absolutely. And at some point in the future, when we get to sleep again, we’ll be thankful for that too.”