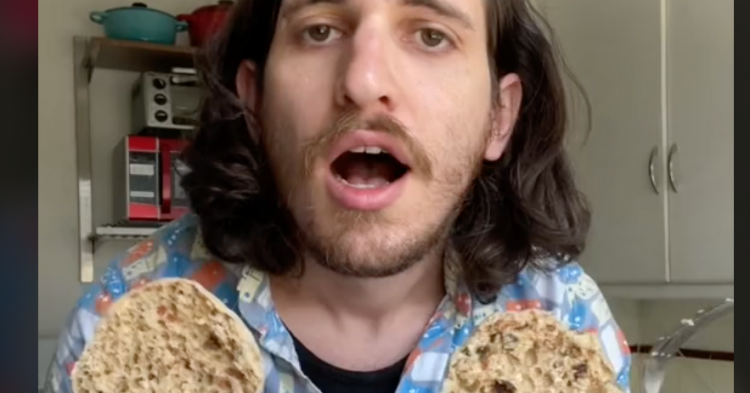 If you split open your English muffins with your thumb and forefinger, you’ve been doing it all wrong, according to one v viral TikTok video. The video has since sparked a major debate about the “correct way” to split open an English muffin with people evenly divided into two camps – the ones who prefer to do it with their fingers and the other ones who always use a fork to split open the round muffin.

The video was uploaded to TikTok by user @SidneyRaz, who has amassed more than 3.5 million views on his English muffin video and counting. In the video, he says, “Here’s something I wish I’d known before I was in my 30s. You’re supposed to open up English muffins with a fork?”

Apparently, Sid discovered the correct way to split the English muffin by closely reading the package of Thomas’ Original English Muffins. On the pack, the instructions clearly state, “Split using a fork.” When Sid did as instructed, the result was magical for him.

“This is gonna be perfect. This is perfect,” Sid says while opening the muffin.

On Thomas’ Original English Muffins website, the manufacturer clearly states how you can open your next English muffin with a fork or your fingers if you prefer to get them involved.

“First, use your hands. Find a crease on the side and pull the muffin apart. If you prefer, you can use your fork. Just poke a hole in three sides of the muffin with a fork and pull apart. Do not use a knife. This cuts away the delicious ‘Nooks & Crannies’ texture. Place each side of the English muffin in separate toaster slots to toast all sides evenly.”

In the viral video, Sid learns about splitting English muffins with a fork and then does it for all to see in the video, which was posted to the Chinese-created social media platform. Thousands of people left comments on the video, including the following from users around the globe.

“I can’t forking believe it,” wrote one user.

“I’m in my forties, English, and NEVER seen a muffin like that,” one British user wrote regarding English muffins in general.

“I’ve literally just torn them apart with my bare hands.”

“You’re telling me I have to wash an extra dish, so I will not be doing that,” one critic wrote in regards to adding a fork to the English muffin splitting experience.

“I just stick the fork in multiple times to make a dotted line. Then it opens up rather than using the fork as a knife.”

“I’m just confused on how you were opening them before,” wrote one user who added a cry-laughing face emoji.

“Forks help to get better nooks and crannies. I thought everybody knew that.”

One superfan was glad for the video because it gave them a new way to eat the breaded item: “I literally eat an English muffin every day and just rip it apart and hope for the best. But now I just want to try this.”

Do you use a fork or your fingers to split open English muffins?