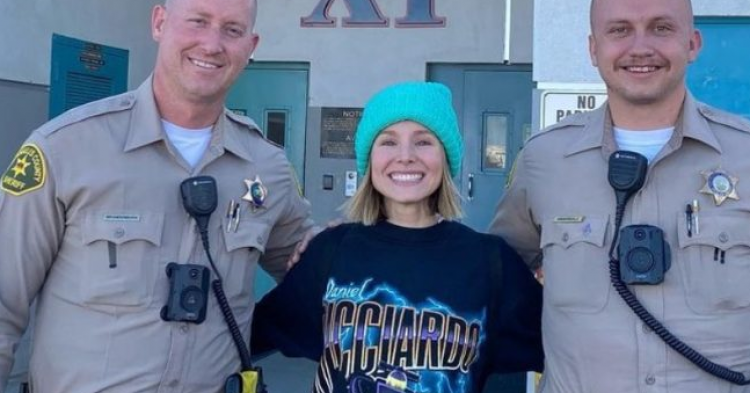 When a celebrity makes a sighting in Los Angeles, people take notice. But when Kristen Bell appeared in a photo with sheriff’s deputies with the Los Angeles Sheriff’s Department Lancaster Station, she left fans gasping for breath. People were furious with the Frozen star for showing her undying support for the men and women in blue and began to criticize her heavily for posing for the photo in the first place.

“Today, we had the absolute pleasure of meeting Kristen Bell, who was hands down, the kindest human ever,” the Los Angeles Sheriff’s Department Lancaster wrote as a caption for their post on their official Instagram account. “There truly never is a dull moment at Lancaster!”

The post from November 20, 2021, received a lot of attention on Instagram. More than 7,500 people have liked it, and hundreds of others shared comments, including the following ones.

“l love it when Hollyweird ppl stand on the thin blue line. All the haters can SUCK IT! Blue Lives Matter.”

“Awesome. A visit to show support is great. Love it.”

“Glad to see you stand for something and not fall for anything.”

“Love it. Thank you, law enforcement!!!”

“Thank You, Kristen Bell, for showing your support to the vast majority of law enforcement that does an excellent job and risks their lives and protect us every day.”

However, critics took note of Bell’s allegiance to the police officers in the Los Angeles area. According to the Los Angeles Times, the LA department includes gang-like groups of officers who are “accused of glorifying violence and whose members have cost taxpayers tens of millions of dollars in legal payouts.”

Nevertheless, Kristen Bell and her husband Dax Shepard have spoken publicly about their support for the Black Lives Matter movement. Bell has also addressed her intention to raise her kids to be anti-racist and to show their support for people of all colors and creeds.

Bell even authored a children’s book called The World Needs More Purple People, which helps children understand the common ground people share rather than focusing on what makes people different.

However, there was a public outcry from people who thought that Bell’s photo with the police was an outrage.

“Wow, this sucks so much, Kristen Bell. Taking pictures with deputy gang members,” one person wrote.

“Will one of you famous whites that know @KristenBell please handle this? Don’t make me start snitch tagging,” another critic added.

“Hey Kristen Bell, did you tweet #blacklivesmatter cuz this ain’t it.”

Bell and her family have not yet commented on the backlash she has received for posing with sheriff’s deputies in Lancaster County. However, she may want to remain silent on the issue until all the negative media washes over, so it doesn’t hurt her career.

Despite the criticism, it’s clear that Bell has a lot of support from people who think she did the right thing. Hopefully, she’ll continue to show her support for law enforcement while continuing to work to raise awareness about racism and police brutality.