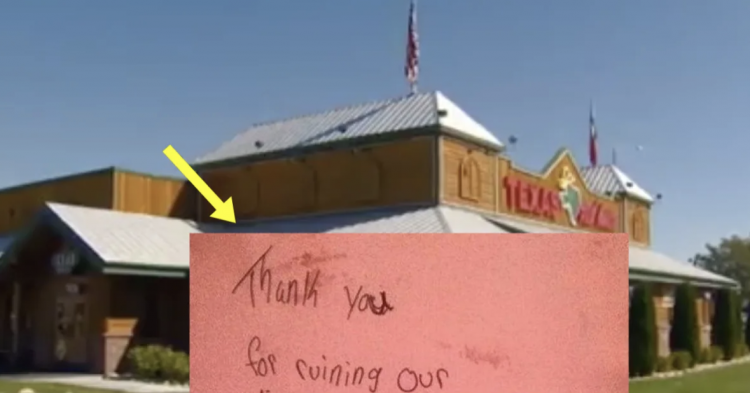 Katie Leach was excited to get out of the house for a family dinner at Texas Roadhouse. The popular chain of eaters is known for its fun environment that caters to families and other groups. However, Leach was shocked when other diners at the restaurant came over to her table and slapped down a note about how Leach’s 10-month-old son had “ruined” their dinner because the baby had been crying, yelling, and making a lot of noise.

Unfortunately, mom admitted that her son had developed a passion for yelling, which she described as the “new thing” he liked to do. At ten months old, the boy is learning to vocalize and communicate with his voice, just like every other baby that has grown up.

Leach is a resident of Nampa, Idaho and usually feels her community is welcoming and accepting. However, this incident at the Texas Roadhouse rubbed her the wrong way, so she turned to Facebook to post about her experience – and her message has since gone viral thousands of times over.

She wrote: “He will yell when I tell him no when he’s super excited and happy or just for no reason at all. I’m doing my best to teach him an indoor voice and to not yell back at me when telling him no etc. But he is only 10 (almost 11 months) and LEARNING.”

The family was at the Nampa Texas Roadhouse location when her baby Drew began yelling on and off, as was his new habit. Because the boisterous restaurant had a lot of activity, Leach didn’t think anyone was bothered by her noisy son. She was wrong.

“He had been screaming off and on just with everybody as they were singing happy birthday. And when one of the waitresses would come up, he’d scream to tell them hi,” she said. “We all tried quieting him down, which a majority of the time he did, but he also was so excited to be around all the commotion. He was not yelling to be mean, or because he was mad, it was purely from excitement and being happy.”

Halfway through the Leach family meal, two diners in “their late 50’s or early 60’s” slammed a note down on the table near baby Drew. 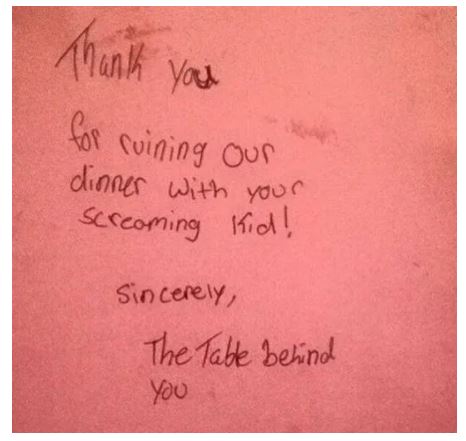 The handwritten note read: “Thank you for ruining our dinner with your screaming kid. Sincerely, the table behind you.”

The woman was seated close to Leach, so the mom approached the woman and explained that her son was still young and didn’t know what he was doing. The upset woman told Leach that she has grandchildren and none of them were as misbehaved as Drew.

She said: “He’s so young. He barely understands now. I mean, he’s starting to learn that when we tell him no, that means to tone it down, which he was doing.”

Leach believes the diners were rude and could have handled the situation better. The restaurant manager agreed. They comped Leach’s meal and invited the family back to Texas Roadhouse anytime.

Travis Doster, a spokesman for Texas Roadhouse, addressed the incident: “We’re in the hospitality business. We want all our guests to have a great experience. We were voted one of the loudest restaurants by Consumer Reports. We are proud to be loud. If you want to hear clinking wine glasses and clinking forks, then this probably isn’t the place for you.”