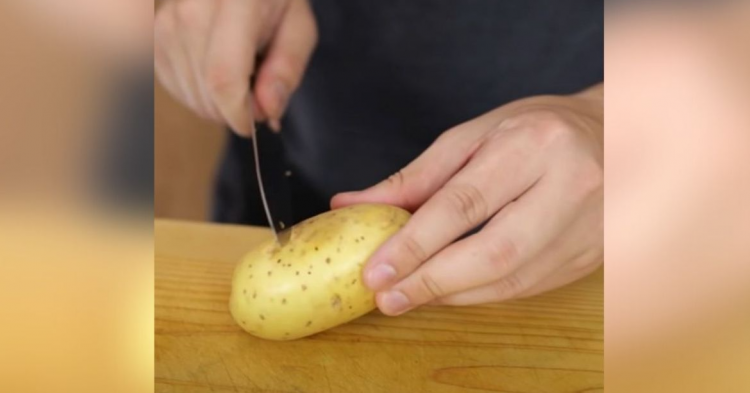 Sometimes it only takes thirty seconds to completely revolutionize the way you do something. And this video from Foody Tube is one of those things. In the clip, you’ll see an easy way to peel potatoes that you’ll wish you knew a long time ago. The method can save you a lot of time and even help reduce the number of dishes you have to wash – that’s because this potato-peeling method does away with the common potato peeler tool and opts for a paring knife instead.

Make sure you use a sharp knife for this potato peeling trick. The blade has to be sharp enough to pierce the potato’s outer skin.

While holding the knife in one hand and the potato in the other, press the blade against the potato and cut it in a spiral motion as you twist the potato around in your hand. You’ll want to cut the spiral down the length of the potato, which can be a bit challenging at first – just watch the video again to get the hang of it.

Next, boil your potatoes that have been sliced up using this method. Wait for the potatoes to cook all the way through until they are ready to be eaten. That’s when you’re ready for the next step in this potato peeling process.

When the potatoes are done boiling, the skin will come off rather easily. However, the chef behind the trick also explains that by leaving the potato skins on the root vegetable, you can infuse more flavor into the dish. This is something that many people will appreciate, especially if they are foodies or just enjoy a good potato dish.

“By cooking the skin with the potato, you actually infuse the potato with more flavor because most of the flavor of the potato is actually in the skin,” the YouTube chef said.

After the potatoes are done boiling, it’s time to remove their skins. Make sure they’re still not too hot to the touch because you’re looking to use your hands to peel off the skin – not play hot potato with the boiled root veggie.

Simply grip the potato with one hand and slide the skin off with the other hand. The process is so easy to do that you’ll be shocked that you haven’t tried this method before while boiling potatoes for lunch or dinner.

Many people shared their reactions to this potato-peeling method in the YouTube video comments. One person believes they’ll only be using this method going forward.

“I just tried it, and it worked well, even with eyes. Much more flavor. I think I’ll do it this way from now on.”

Another person joked, “This is so much more humane than skinning the potato alive. Always boil them first. They don’t feel anything that way.”

And if you’re looking for a nutritional boost, keep the skin on.

“Better yet, don’t peel the potato at all and eat it whole! The skin has most of the plant’s micro-nutrients. Pretty much the same as the deal with eating full-grain rice instead of the bone-white variety.”