Little Girl Holds Her Sister For The 1st Time, But It’s What She Whispered That’s Going Viral. 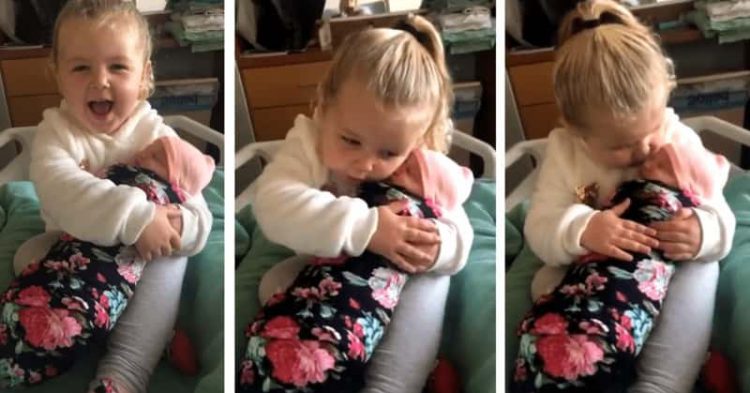 When parents captured moments like this on video, it becomes footage they will treasure for the rest of their lives. The video below shows the moment a little girl is introduced to her newborn sister for the first time. The little girl shines a huge smile at the camera and then says the sweetest thing imaginable. She vows to always protect her newborn sister and to make sure to always watch out for her – which is exactly the type of thing a parent wants to hear.

The video features three-year-old Molly Conley. She was delighted to hear the news that her mother, Heather, was pregnant with a baby. After hearing all the details, she asked her mother often when her little sister would come into the world. Experts advise parents to make sure they bring their children along for the ride and involve them in the birth process in some way. While Molly was not in the delivery room when her newborn sister came into the world, she was ready to meet her when the family came home.

Although Molly had an older brother named Jack, she was excited to become an older sibling herself. Not only did she look forward to having someone who would look up to her, but she also felt excited to have a little girl entering the family. With her newborn sister arriving, she would no longer be the only little girl in the clan.

Heather shared the footage on Twitter, which went viral almost immediately. While it has been a little less than a year since she initially uploaded the content, we wanted you to see the precious moment because it will brighten up your day.

Heather tweeted, “Molly meeting her little sister for the first time. ‘You just came out of Mommy’s belly .. I won’t drop you … I won’t let you go any more,’ (she said.). Molly and Cora’s video is up to 12.4K views on Facebook. Everyone loves it is just so innocent. Shocked, I caught this on camera.”

Dozens of people shared comments about the footage on Twitter. Here are some of their swooning thoughts.

“This is the sweetest thing I’ve ever seen,” wrote one user.

Another agreed, writing: “The sweetest thing!”

“Made my year! BEAUTIFUL girls! God bless you all. It made me cry.”

Another delighted person wrote, “Congratulations on your two babies. Molly is exceptional with her love for her new sister.”

One person suggested that Heather should keep the video available so she could show it to the little girls when they’re older.

“Save this and force them to watch when they fight over barbies, boys, and black eyeliner.”

Footage like this should be saved in a special place. Hopefully, Heather has it backed up on her computer so she can share it when the right moment arises. Molly and her little sister are going to love watching this clip when they get older because it will remind them of the simpler days when they were babies.

What do you make of this adorable moment between two sisters?

Molly meeting her little sister for the first time 😍

Molly and Cora’s video is up to 12.4K views on Facebook ♥️ everyone loves it is it’s just so innocent. Shocked I caught this on camera. pic.twitter.com/i9g3MZDG2Q