Local Chairwoman Bans The Pledge Of Allegiance, Threatens Those Who Stand Up 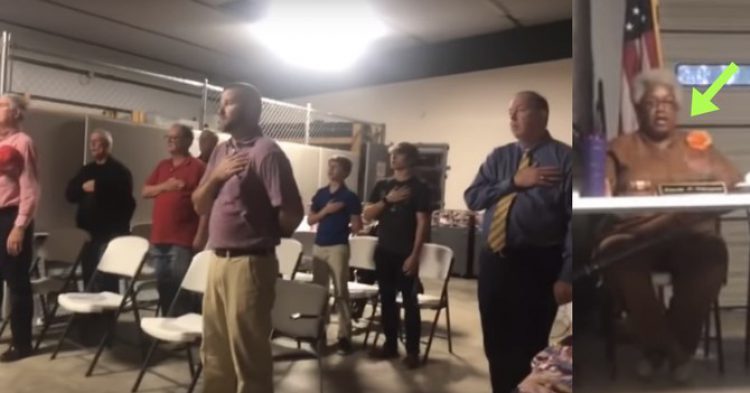 When it was her turn to speak at the end of the Bladen County Board of Elections meeting, Democrat Louella Thompson had a controversial thing to say. Thompson argued that the recitation of the pledge of allegiance was a disruption to the governmental meeting. As you can imagine, her viewpoint was highly controversial among the number of patriots that were attending the board of elections meeting.

She said, “If that happens again, law enforcement will be called. It is against the law to disrupt a meeting. That is going on, and that is what happened today with the reciting of the pledge.”

Earlier in the meeting, the board of elections voted three to two along party lines against a proposal that would have added the pledge of allegiance to the official agenda of the Bladen County Board of Elections meeting. The proposal was introduced by Republican Emory White but was shot down because Republicans were in the minority.

White said, “Being in the military, we honor the flag all the time in the military. I just think it should be on the agenda. There is no way we should have a meeting without it. It’s like having a prayer. Why do we object to the Pledge of Allegiance?”

Thompson made it clear that she didn’t want to recite the pledge when asked about it, saying, “That’s my right, and I exercise it.”

Dan Smith, a member of the audience, wanted the politicians to vote for reciting the pledge. He said:

“You have an opportunity here to make a statement about what’s right and what’s wrong, and it’s right to say the pledge. It really is. If you don’t want to recite it, by all means, don’t recite it. If you don’t want to stand up, by all means, don’t stand up. But give the other people and the opportunity to do so. And that’s not a lot to ask. That’s a compromise, and that’s what we need in this country.”

At this point, Smith put his hand over his heart and started reciting the pledge of the allegiance. Other members of the audience stood up to join him and shocked the people in the board of election.

A spokeswoman for Governor Roy Cooper told the Bladen Journal: “The Governor leads the Pledge of Allegiance before every Council of State meeting. He doesn’t agree with the action taken, and he thinks it’s a good practice to say it before a Board of Elections meeting.”

Representative Dan Bishop was upset that Thompson threatened to involve law enforcement to enforce her right not to recite the pledge.

“I was appalled that the Chairwoman of the Bladen County Board of Elections will prevent board members—on the threat of arrest—from reciting the Pledge of Allegiance. It shows a twisted moral code to oppress the right to honor a flag that stands for freedom from oppression. I stand with the board members who continue to revere and respect our flag and those who lost their lives defending it.”

What do you think about this Florida vote?