Navy Sailor Agrees To Cover Up “Offensive” Tattoo After One Complaint 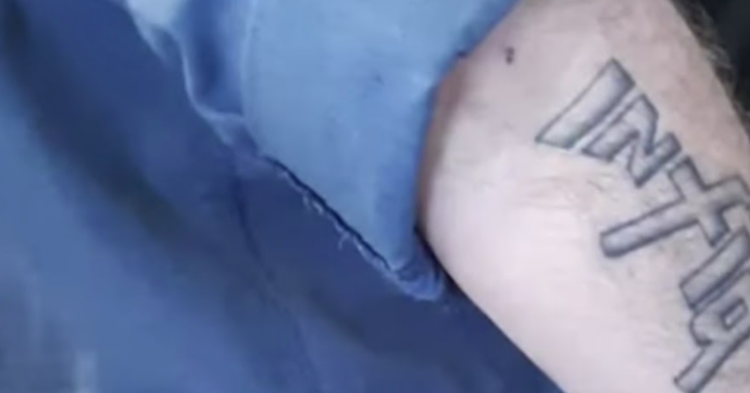 Social media users are outraged by a tattoo that a Navy sailor has on his arm. Because members of the military are supposed to be upright citizens and examples of the best of what people can be, some critics believed that the sailor’s “infidel” tattoo took things a little bit too far. Not only did the white sailor get the scary word written across his arm, but he also had the letters designed in the shape of a machine gun to drive home the deadly point of his message to those he wanted to harm.

Although users online were not happy with the tattoo, officials with the military decided that there was no ill intent on the sailor’s part” and he could continue to serve in the Navy.

The initial warning was posted to Twitter by Rob Hutten, who saw the Navy man in public and snapped a photo of the controversial tattoo. He also wrote the following when posting it to Twitter: “Saw a Navy guy in Tim’s today in uniform and HMCS Fredericton hat sporting a huge, ‘INFIDEL’ tattoo on his right arm, stylized in the shape of a machine gun. The message is clear and scary as hell.”

Cough, a representative of the Canadian Navy, confirmed that the military was looking into the example but found that the sailor had not meant anything terrible by the tattoo. Nevertheless, the sailor would be expected to cover up the tattoo going forward because the Canadian military has a body tattoo police.

Gough stated: “He will abide with the Canadian Armed Forces’ policy on tattoos, and he plans to tattoo over this tattoo as soon as possible,” adding, “As such, the chain of command considers the matter closed, and no further action is required.”

Their military policy states: “Members shall not acquire tattoos that are visible either in military uniform or in civilian clothing that could be deemed to be offensive (for example, pornographic, blasphemous, racist or containing vulgar language or design) or otherwise reflect discredit on the CAF.”

Rebel News ran a report about the controversial tattoo design and shared a video to YouTube. The content has been viewed more than 70,000 times since it was uploaded. Now, people are turning to the comment section to criticize the Canadian military for asking the sailor to cover up the “infidel” tattoo that one Twitter user found offensive.

What do you think about this man’s tattoo? Is it acceptable or not?