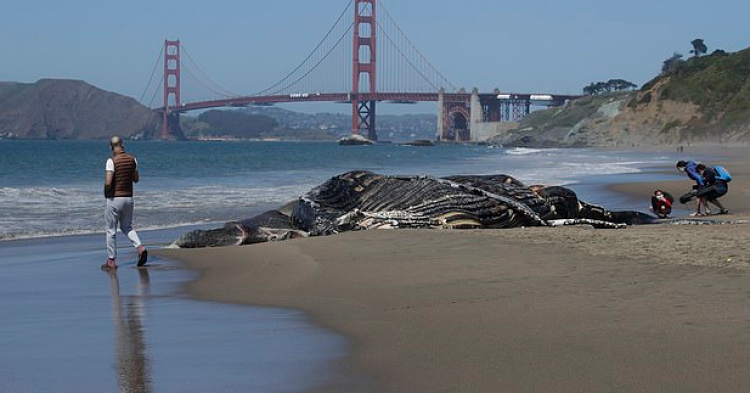 While the bay city of San Francisco is reeling from the coronavirus pandemic, a new threat has just washed up along the south end of Baker Beach. The gargantuan problem that washed up on the beach outside of San Francisco was the decomposing carcass of a humpback whale. Because the whale poses a threat to people, health officials have asked members of the public to stay far away from the beached whale while they figured out how to clean up the rotting carcass.

Despite the warnings from health officials, spectators arrived by the dozens to get a look – and a whiff – of the dead whale. Scientists from the Marine Mammal Center and the California Academy of Sciences got to work while curious members of the public hovered over their shoulders. The researchers performed a partial necropsy on Tuesday and discovered that the whale carcass was “severely decomposed,” according to reports from SF Gate. 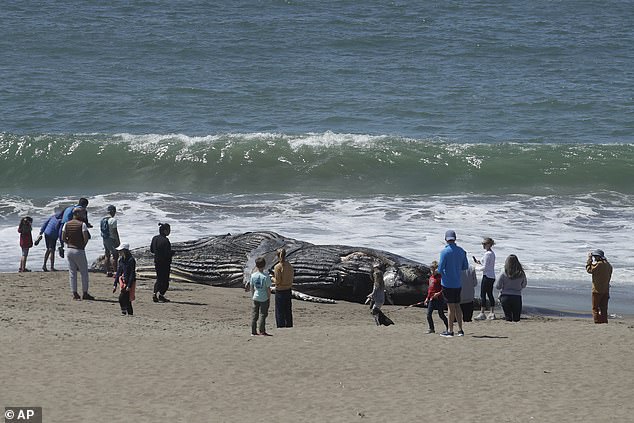 The whale has been described as a juvenile. The scientists will perform a complete necropsy on the beached humpback at some time in the future – but right now, they need to get the rotting carcass off the beach before members of the San Francisco community get too close to it.

“As we investigate why this whale died, we ask people to keep their distance from the whale, not only because of shelter-in-place orders but also due to any potential diseases the animal might have that could transmit to people,” said Dr. Pádraig Duignan, chief pathologist at the Sausalito-based Marine Mammal Center.

Dr. Duigan added, “Whale necropsies are critical to providing insights into the overall health of these animals and their ocean environment, including human activity that can impact them, with the goal of understanding how best to protect these magnificent animals.”

Not only are public health officials warning residents to stay clear of the dead whale, but the beaches are also supposedly closed due to the COVID-19 pandemic. However, curious San Franciscans still venture out onto the sand to get a good look at the dead whale while it is still in the vicinity.

The National Park Service has offered to support the city by helping bury the whale on site. This would reduce the public safety hazard of the dead whale carcass on the public land.

When the center completes its study of the whale, that is when the NPS will help bury the beached beast.

“The National Park Service will support the city in burying it on-site to reduce its public safety hazard,” NPS spokesperson Julian Espinoza.

Some people are confused whey San Francisco has to warn people to stay away from the giant carcass of the decaying juvenile whale. They would think that a stinking mass of flesh would be enough to deter people from the scene of the beached whale. However, the warning was clearly ignored, as is evident from all the photos taken of the whale.

Because the humpback whale was severely decomposed, it is unclear how far it floated in the water and what killed it. The necropsy might offer more insight.