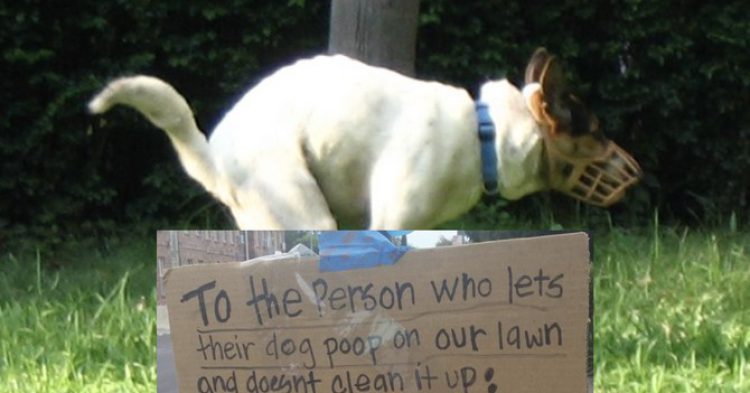 A homeowner in Los Angeles posted a handwritten sign on a piece of discarded cardboard to anyone who lets their dog poop on the grass. Although such signs are common in certain neighborhoods, this homeowner made the additional threat of picking up the poop and slathering it across the windshield of the car belonging to the next dog owner who fails to clean up after their pooch.

The sign was spotted near the intersection of Wilshire Boulevard and Sweetzer Avenue. The sign was written “to the person who lets their dog poop on our lawn and doesn’t clean it up,” and was signed with “Love” from “Annie.” 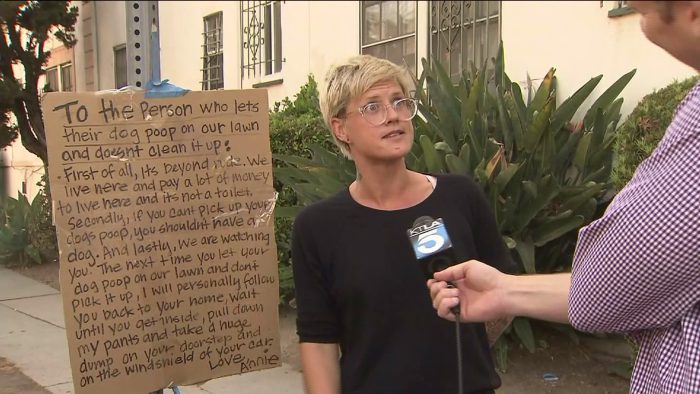 The sign was long but made it very clear that punishment was coming for any dog owner who failed to clean up after their canine.

“First of all, it is beyond rude. We live here and pay a lot of money to live here, and it is not a toilet. Secondly, if you can’t pick up your dog’s poop, you should not have a dog. And lastly, we are watching you. The next time you let your dog poop on our lawn and don’t pick it up, I will personally follow you back to your home, wait until you get inside, pull down my pants and take a huge dump on your doorstep and on the windshield of your car.” 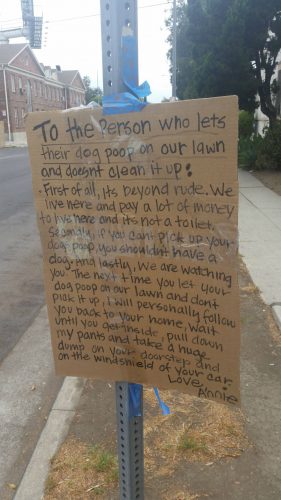 Any dog owner who ignores Annie’s sign is in for a stinky surprise. No one wants to have another person take a dump on their property – especially when it is so easy to avoid such a horror show. Although Annie’s threat is absolutely disgusting, she is not wrong for posting the sign to stop other people from letting their dogs do their business on her property. And if the dog just happens to take a squat on Annie’s property, the least the dog owner could do is clean it up.

When the image of the sign was posted to Reddit, it was met with mixed reactions. Some people felt that Annie was right to stand up for her property. However, one dog owner admitted that such signs make them furious.

“As a dog owner, this infuriates me like no other. I live in a neighborhood where there are a lot of dogs, and there is dog s**t everywhere. There are plenty of buildings around that have free poop bags and trashcans, but people are f***ing lazy. There have been some instances where I ran out of bags, but I’ve always gone back to pick it up. I feel like non-dog owners give me the stink eye whenever I’m walking my dog, and I understand. They don’t know if I’m one of those a**holes who don’t pick up after my dog. I even had a security guard shout “EXCUSE ME” after my dog took a s**t. Mind you. It wasn’t even 10 seconds after he went to where she felt like she had to shout to me across the street.”

Do you think police should get involved in such instances?