Parents Walked Out In Protest Once These Middle Schoolers Started Singing 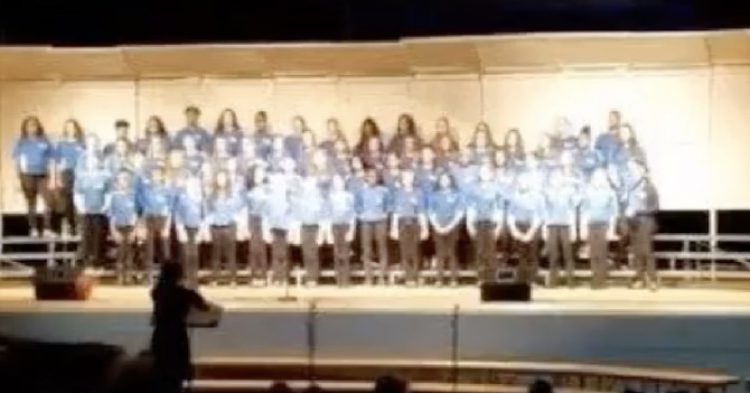 Every parent loves to watch their child perform in a music recital. However, parents who were attending the Springfield Middle School’s fall concert were utterly shocked to witness the children singing Cotton Needs Pickin’. The song was performed days after students from the district posed with a Confederate flag, which added to the contention of the issue – causing many parents to walk out of the auditorium despite it being their child’s eighth-grade choir performance.

One parent of a student at the school, Nicole Maulsby, who identifies as Cuban, took to Facebook with outrage. She had recorded the controversial choir performance and shared it with the internet so other people could see what the teachers at the school were doing. Maulsby’s husband, Alonzo, who is African American, walked out of the auditorium during the performance because he was so offended.

Maulsby believes that the song was performed with racist intent. Because the song is about workers joyfully picking cotton, she felt the school was trying to send a message encouraging slavery in the South. And when people on Facebook watched the performance, they largely agree, feeling that the teachers were using the eighth-grade students to purvey a racist message and solidify white supremacy across the community.

However, the Springfield Schools Superintendent, Matt Geha, denied that the song was performed with racist intent. He admitted that the song was lifted from a book of American folk songs and that he had not received any direct calls of complaint following the performance. However, he did admit that the number of complaints streaming in from the Facebook post was alarming to him and the teachers at the school.

“I know that timing can sound bad, but it’s a historical component for what the choir department had to use for their curriculum.”

In other words, the superintendent was blaming the school’s curriculum on the choice of the song.

The lyrics of the song include, “Cotton needs pickin’ so bad, we’re going to pick all over this field.”

Maulsby felt that the choice of song was a veiled incident of racism and was “a little bit too close.” Since the school was embroiled in the Confederate flag situation and racial slurs were “being used directly across the street in the parking lot.”

Whether or not the school meant for the song to have racist connotations, they made an unwise choice given the community’s recent controversies regarding race relations.

The month prior to the performance of the controversial song, male members of a Christian youth organization called Young Life shared videos and photos of themselves posing with the Confederate flag during a rally. The Confederate flag historically stood for the states that ceded from the United States because they wanted to keep African Americans enslaved. These Christian youths also posted content online with racial slurs via their Snapchat feeds.

Because the school and community were already embroiled in a heated racial debate, the choice of the song only threw more fuel into the fire of discord.

What do you think about the school’s choice of performance?