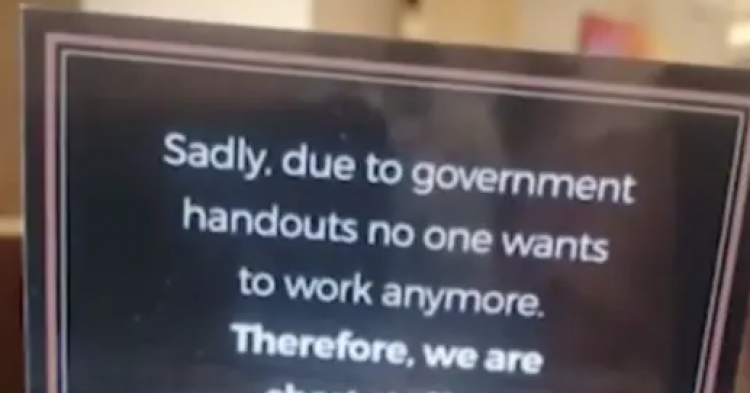 Diners at Corralito Steak House in El Paso, Texas, were disgusted when they arrived at the restaurant ready for a hearty meal but were greeted with signage that insulted their intelligence and their country. As every restaurant struggled to keep its doors open during the pandemic, this one thought its problems were unique. However, staff shortages have been the norm across the entire United States ever since the country’s economy collapsed under President Trump in 2020 as millions of people were thrown out of their jobs and onto the street in the middle of the worst pandemic the world has seen in more than one hundred years.

One diner snapped a picture of the sign the Corralito Steak House posted near the dining tables. The sign alerted customers that they were short-staffed and expressed their wish for patience – however, the sign also blamed the government for making it hard for them to serve customers food as if the government hadn’t offered them help in the form of the Paycheck Protection Program, which gave the business thousands of dollars to keep employees on the books.

The offending message read: “Sadly, due to government handouts, no one wants to work anymore. Therefore, we are short-staffed. Please be patient with the staff that did choose to come to work today, and remember to tip your server. They chose to show up to serve you.”

After the signage went viral on social media, reporters from Texas’s KTSM 9 News called the steak house demanding comment – but the restaurant has remained silent in the hopes that everything would blow over and people would stop noticing their insulting message to customers.

What makes matters even worse is that El Paso’s Corralito Steak House received government handouts to the tune of $1,000,000 in the form of Paycheck Protection Program benefits. 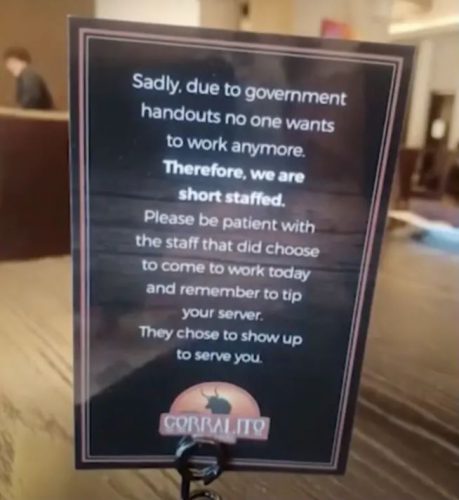 Veronica Frescas was the person who first noticed the offensive sign and decided to do something about it. According to a June report by KTSM, Frescas snapped a photo of the sign and shared it on social media so people would understand that the steak house was operated by hypocrites.

“I understand a lot of us are frustrated, but there could’ve been a better way to say something,” said Frescas. “We’re still all in this together, and, for something like that, it didn’t seem like it was very El Paso strong.”

Commenters found it insulting that the restaurant was willing to accept government handouts when it benefits them – but criticize others for doing the same. Other people suggested that the restaurant pay their employees a living wage rather than have the hard-working servers rely on tips to make ends meet in their lives.

Business people in Texas understand that restaurants like this steak house are struggling to keep up with nationwide chains. However, Leo Duran of the Texas Restaurant Association believes that employers need to raise wages to remain competitive.

“If you’re going to survive, you’ve got to compete, and wages are really the baseline of what employees are interested in,” said Duran, president-elect of the Texas Restaurant Association. “Just trying to shake off this pandemic and realize that we’re going out of it; let’s get back on our feet and get back to work.”

The restaurant has not yet released a statement in response to the viral sign – but we will be sure to update this story as soon as they do. In the meantime, let us know what you think about this sign and the Corralito Steak House’s decision to post it in the comments below.