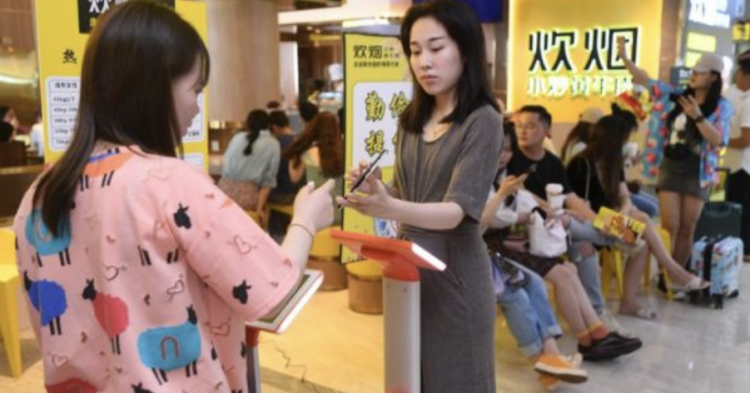 One Chinese restaurant has instituted an “unconventional” customer policy that limits the amount of food overweight patrons can enjoy. The Chuiyan Fried Beef food chain has asked customers to step on a scale and weigh themselves before entering their establishment to determine just how much food they’d be allowed to put onto their plates and into their mouths. This policy has shocked people across the world, including those who live in Changsha, China, where the practice has been implemented.

Apparently, the restaurant wants to promote good health practices by starting with the amount of food customers are allowed to consume. While most people are only used to having to step onto the scale while at the doctor’s office, diners in Changsha, China now need to get with the program or find a different restaurant if they don’t want to step onto the scale outside the Chuiyan Fried Beef location.

CNN reported on the strange policy that forces customers to “weigh themselves on a set of scales and provide personal information.” After determining their weight, the restaurant will then serve them a quantity of food “according to their physique.”

The store wrote: “Netizens are welcome to come to the store to experience it and give their comments and suggestions.”

Individuals who are overweight or obese are offered low-calorie menus. The restaurant must have felt that they were doing something good for people by watching what they eat when they enter their establishment. However, the public perception of the policy does not match. People are outraged and offended that they have to step on a scale outside of the Chinese restaurant if they want to be welcomed through the door to dine on fried beef.

It’s crazy that an adult woman must weigh fewer than ninety pounds if she is to be welcomed into the establishment and served the chef’s special.

One reason that this restaurant has instituted the weigh-in for customers is that Chinese President Xi Jinping wants to limit food waste. Since China has been decimated with climate change resulting in record-levels of flooding, crops have been destroyed. China has also experienced a swine fever epidemic that has forced farmers to cull large quantities of their livestock.

China has so much food waste that back in 2015, the country’s catering industry threw away seventeen to eighteen million tons of food each year.

CNN reported, “Chuiyan isn’t the only restaurant or group establishing tighter rules on consumption. Last week, a catering association in the central city of Wuhan advocated for customers to order ‘N-1’ dishes, or one fewer dish than the number of people dining.”

What do you think about China’s restaurant weigh-ins?