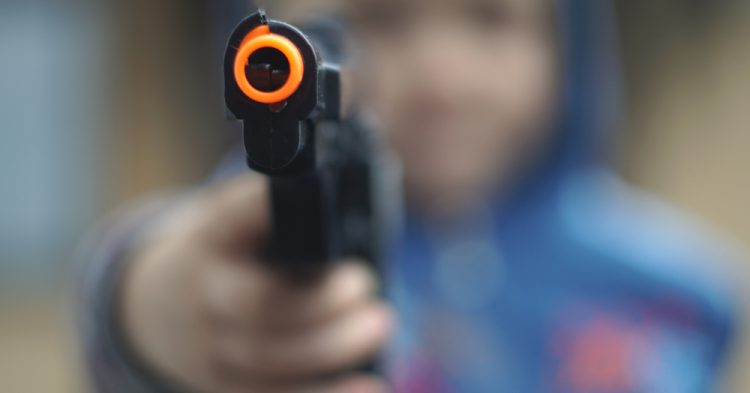 Most schools across the United States have a zero-tolerance policy when it comes to guns and violence in the classroom. But now that millions of students are staying home to learn remotely, teachers and school officials are unable to protect children. While the incidents of school shootings will likely go down temporarily, the potential for violence and abuse at home has risen astronomically.

Now, school officials in Colorado were forced to make a snap decision to call authorities after a child appeared on screen with a gun. The student, a 12-year-old Black boy, was reported to the local sheriff and suspended from school because he wanted to share his toy gun during the Zoom class.

Isaiah Elliott had been playing with a friend outside. However, the teacher could still see Isaiah and noticed what appeared to be a gun. Since the teacher knew about the school’s zero-tolerance policy for firearms, school officials were alerted, and so were the cops.

Elliott’s father said it was “frightening and upsetting” to have a squad of armed deputies arriving at his home to confront his twelve-year-old boy about the toy gun issue. While the school could have spoken to Elliot about the toy gun or called his parents, they opted to first call the authorities and get the police over to the Black boy’s home. Elliott’s father wished that someone had spoken to him about the issue instead of just calling the cops on his boy.

Nevertheless, the school shared a statement confirming that their actions were “consistent” with the protocol put in place to protect children from firearms. They also said they “never have or ever will condone any form of racism or discrimination.”

Although his green “zombie hunter” gun was a toy, Elliot found himself in trouble with the law. He is a seventh-grader at Grand Mountain School in Colorado Springs and was taking an art class online on August 27 when the teacher spotted the firearm.

Elliott’s father, Curtis Elliott, said that his son had simply moved the toy gun from his right side to his left side without realizing others could see it.

However, the El Paso County Sheriff’s Office shared a redacted report claiming that Elliott was “playing” with the gun along with another student. The school was also recording every move the boy made.

The art teacher alerted the school that a student was “waving around a toy gun,” so the school sent the sheriff to do a welfare check. Isaiah was terrified when armed police showed up on his doorstep.

“I didn’t know what was going to happen. I didn’t know if they were going to bust down the door,” said Isaiah. “My heart was beating super fast.”

Deputy Steven Paddack told Elliott that such behavior “could potentially lead to criminal charges in the future.”

“It was really frightening and upsetting for me as a parent, especially as the parent of an African-American young man, especially given what’s going on in our country right now,” father Curtis told Fox 5, San Diego.

Elliott’s parents are grateful to God that he did not become another victim of police brutality.

His mother told Buzzfeed, “I thank God that it didn’t go another way, and my son is still here with me.”