She Was So Proud Of Gunning Down This Giraffe, But Now That The Photos Are Public She’s In Trouble 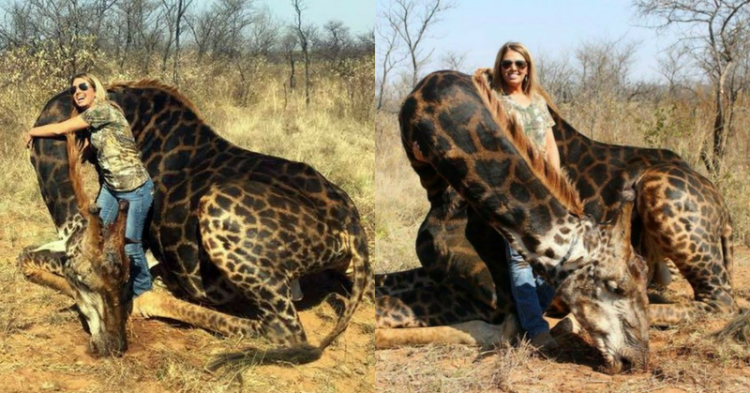 Some people hunt big game because the thrill of shooting deer and elk no longer gets them “high.” Like an addict, they need bigger and rarer animals to shoot and kill if they want to feel the way they did when they shot their first creature. While on a safari hunt in South Africa, an American woman shot and killed an extremely rare and endangered black giraffe because a picture with it would look “cool” on her social media page.

Tessa Thompson Talley or TTT is an American trophy hunter who shoots first and asks questions later. Although she hunts animals that are controversial and very rare, she shoots to kill and then shares her pictures with the public online. 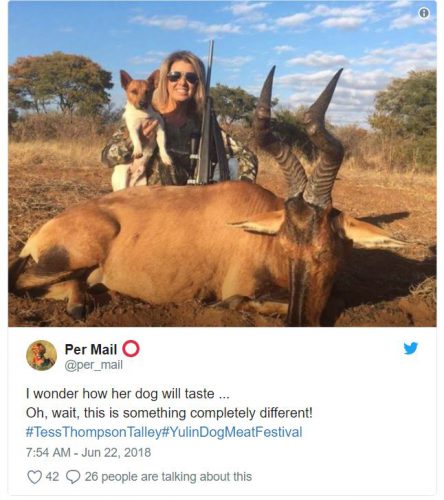 During her recent South African hunting trip, TTT joined a group of people to shoot and kill as many big game animals as she could. Throughout the trip, she killed many critters and posed with many of the animals she shot. Although some offended various people, one image, in particular, met with a lot of backlash. The image that was most controversial was the picture of TTT with a black giraffe.

Comments about her kill included:

“Tess Thompson Talley… may Karma be swift and merciless to you.”

The picture showed TTT holding the limp neck of the large land mammal. The animal was very rare and was over eight-years-old.

TTT captioned the picture with: “Prayers for my once in a lifetime Dream hunt came true today! Spotted this rare black giraffe bull and stalked him for quite awhile. I knew it was the one. He was over 18 years old, 4,000 lbs and was blessed to be able to get 2,000 lbs of meat from him.” 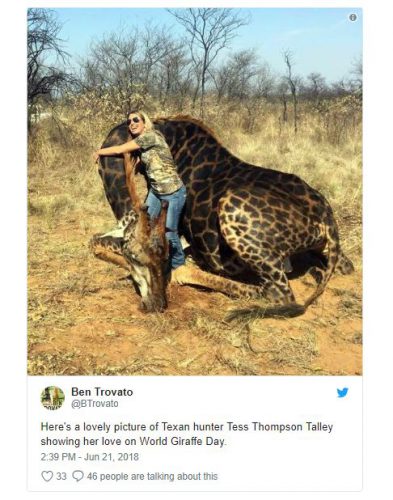 When African Digest saw TTT’s photos, they picked them up and shared them to their animal rights followers on Twitter with the caption: “White American savage who is partly a Neanderthal comes to Africa and shoot down a very rare black giraffe courtesy of South Africa stupidity.”

One Twitter user responded to Africa Digest’s post with: “Tess Thompson Talley. May you suffer guilt, torment, and loneliness from your mental illness. Shame on you.”

The media source also wrote: “Her name is Tess Thompson Talley. Please share. If our so-called governments can’t care for our wildlife, then it’s time we stand up and responsibility of our continent, lands, resources, and wildlife… Let’s have a united voice against pillage of Africa. It’s the only home we have.” 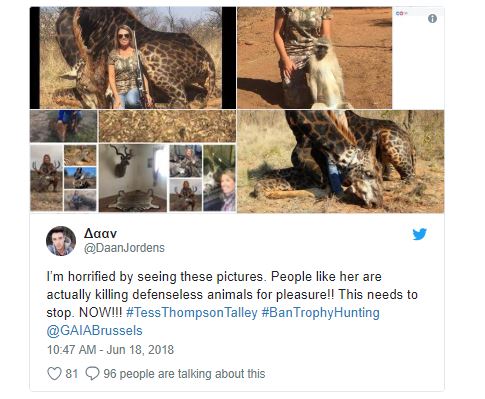 TTT, who is a hunter from Texas, killed a rare animal that is on the verge of extinction. When people started confronting her about the kill, TTT made her account private to hide from the controversy. This also prevented people from posting comments on her photos.

As trophy hunters come to South Africa, the country loses its beautiful wildlife with every kill.

What do you think about the backlash of Talley killing the endangered giraffe?