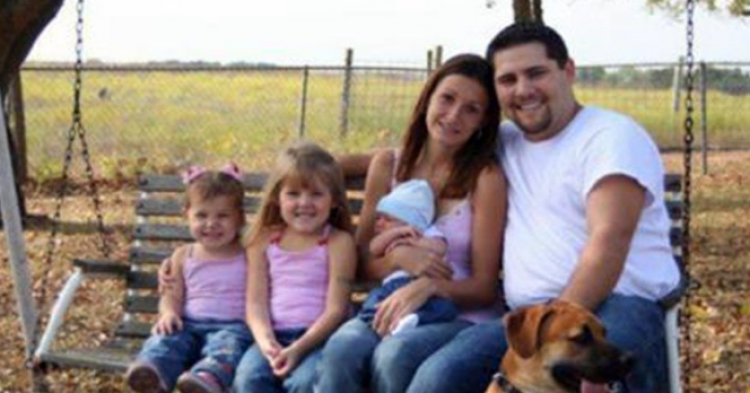 An adorable family of five and their pet dog sat down on a hanging bench for a beautiful photo opportunity. The family was enjoying the beautiful fall weather that still allowed them to wear tank tops and t-shirts because it was so warm outside. The photo captured a perfect family moment that the parents and their children won’t want to forget for the rest of their lives – but the image also captured something extremely creepy for those of you who are willing to take a very close look at the picture.

If you see what we’re talking about – the creepy thing – then you probably already had goosebumps crawling over your skin. In the image of the family on the swinging bench, the girl on the left has something on her arm that simply should not be there. 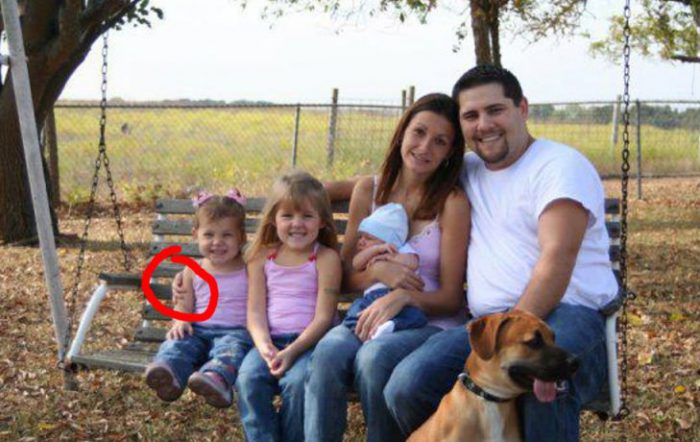 The photo captured on the bench shows the family with their arms around each other in various stages of loving embraces. This includes the girl on the far left. However, the hand that is clutching her arm does not seem to be attached to anyone since the girl next to her is holding her hands in her lap in front of her.

Mom also did not reach around the girls to put her hand on the girl’s arm because she is busy holding the newest member of the family, a beautiful baby child that has a hat on its head. Dad also didn’t reach far enough to put his hand on the girl’s arm. His arm can be seen resting on the back of the bench behind mom and above the head of the eldest female child.

The family in the photo has not been identified, so there’s no telling who the extra hand could belong to. It doesn’t look like it belongs to anyone in the photo – but that doesn’t mean that someone else wasn’t standing just outside of the frame and reached their hand in to touch the girl’s arm.

Or, even creepier, maybe the hand doesn’t belong to a person at all. Maybe it belongs to something else entirely… Perhaps it could be a ghost hand that has appeared from the depths of hell. Or maybe it is just a disembodied hand like the one that exists in the world of the Addams family.

It’s no surprise that an image like this went viral across social media. People are eager to figure out whose hand it is that is clutching the arm of the little girl on the left. Do you think you know who it is? Or could it just be a Photoshop fail? That’s possible given how often people use Photoshop in order to make themselves appear differently than they did on camera.

No matter what the answer is, this family photo has certainly given people the creeps.