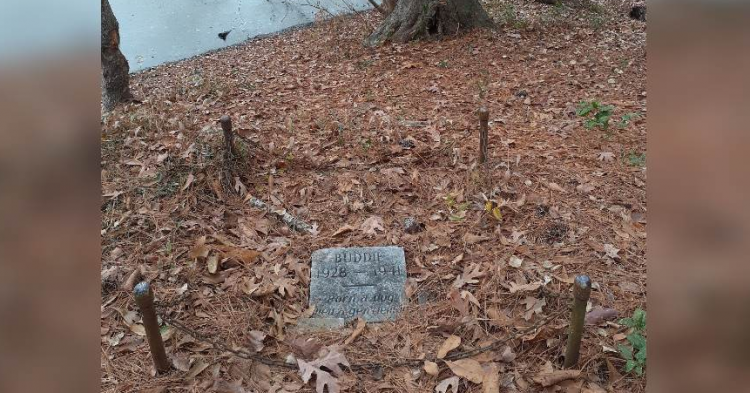 Family pets are truly a member of the family. When their time eventually comes and they pass away, many families go to great lengths to ensure that the animal’s memory lives on for years to come. Some people get the pet cremated and then disperse the ashes in the pet’s favorite park, while others find a gravesite and bury the animal remains, so they have a consistent place to return to year after year to pay tribute to the pet that brought so much love into the family home.

Zach Medlin was walking through Kiroli Park in West Monroe, Louisiana, with his dog when he happened upon a gravestone that caught his attention. He let his dog, Serena, a Staffordshire terrier, off her leash and allowed her to harass the ducks in the nearby lake. While she busied herself with the challenge of chasing down the wild animals and trying to catch one or two for her owner, Medlin took a moment to take a closer look at the gravestone that he happened to find in the middle of the woods in the public park. 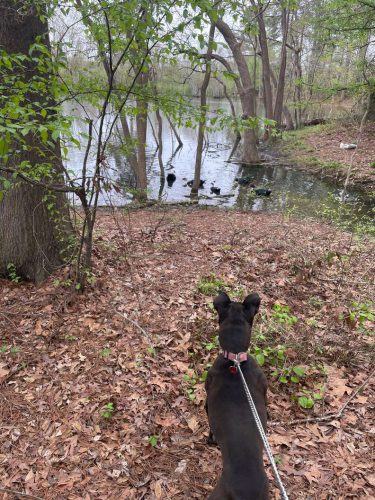 “The inscription was covered by some pine straw,” Medlin told The Dodo. “So I had to move the pine straw out of the way to read what the grave marker had to say.”

So what did the inscription on the gravestone say? Well, according to a photo published online by Medlin, it said: “Buddie, 1928 — 1941. Born a dog / Died a gentleman.”

The pubic park spans 160 acres and is welcome to all in the community. Medlin could not help but wonder why Buddie, a beloved pet, would have been buried in the park all alone, away from his favorite person in the world – his master. Perhaps, Buddie loved the park above all else and would have delighted in being there forever after. 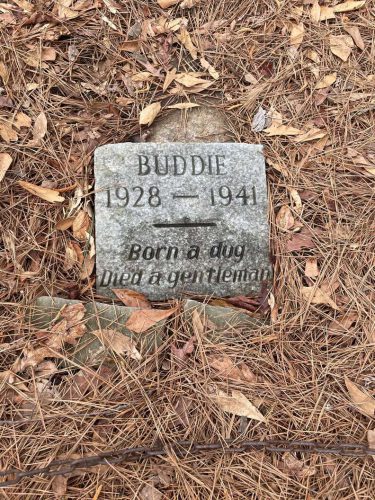 “It warms my heart to know that Buddie carried his owners through the Great Depression,” Medlin said. “All dogs deserve a grave marker.”

Locals know the legend – but for those not familiar with the Louisiana lore, Kiroli Park used to be a summer camp for the Boy Scouts. Apparently, the Scouts had a mascot dog named Buddie. According to the urban legend, a boy was swimming in one of the lakes when he began to go underwater and started drowning. It was Buddie who started barking to alert a camp leader to the dying Scout, so people could rush into the shallows and rescue him from certain death.

“While I was reading newspaper clippings detailing the legend, I found a copy of a handwritten note dated October 18, 1993,” Lora Peppers wrote on Findagrave.com. “It says the following: ‘According to Mrs. Dee Strickland, the dog belonged to Mr. and Mrs. Albert H. Jones, 215 Breard St., Monroe. Mrs. Strickland lived with the Jones [family] in 1932. The dog was a beautiful Irish setter. Mr. Jones frequently took him to Kiroli Park to run, so when he died, he decided to bury him in Kiroli Park.’”

Whether Buddie was a mascot for the Boy Scouts or a beloved family pet, he sure has a resting place any dog would love.