Video Shows Woman Losing Her Mind When She Sees A Giant Spider In Her Car : AWM 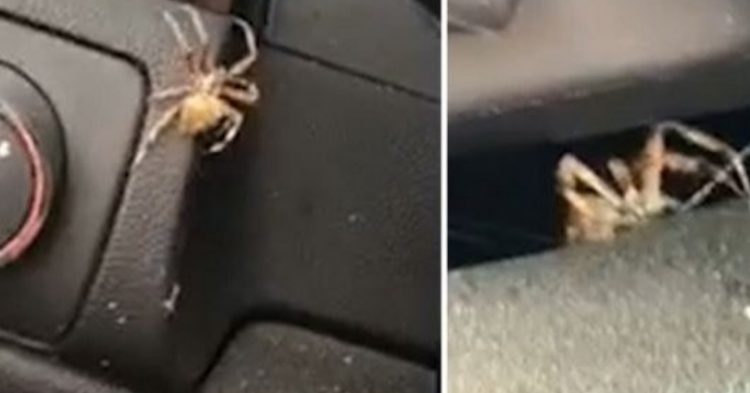 When Virginia Sanders from Summerville, South Carolina, was out for a drive one afternoon, she saw something crawling around her car. Without missing a beat, she took out her camera and started recording the beastly spider as it seized control of her entire vehicle. Virginia has a deathly fear of spiders, which was why this video had become a viral sensation online once she shared the clip to social media.

During the video, it is quite clear that Sanders suffers from acute arachnophobia. She doesn’t like spiders at all and is terrified of them – to say the least.

People agree that the video makes them want to laugh and cry. It’s hilarious to watch Sanders freak out at the sight of the spider. But on the other hand, it also makes people fearful as they would never want to be caught in a similar situation.

The spider in the video is thought to be a brown recluse. These spiders are quite dangerous. They’re venomous to humans, although their bite is not likely to kill someone unless they’re particularly susceptible to the spider’s venom.

In the video, Virginia starts screaming, “Oh my God! Oh, my God! I’m going to die!”

The footage was originally posted to the New York Post and went viral very quickly. Here are some reactions from people who watched the clip.

Most people agreed that they would have been just as terrified as Virginia Sanders.

“I would’ve driven straight at a cliff and jumped out of the car at the last second.”

“If I was a spider, I would commit suicide. If a spider got in my car I don’t care if there are cars going I WOULD RUN OUT AND CALL THE COPS AS SOON AS THE CHERRY IN THE APPLE SEED GETS EATEN.”

“If it’s a brown recluse, it needs to be squished they are poisonous.”

However, some people thought that she should have taken decisive action because her fear was so overwhelming.

“One question: Why didn’t she get out of the car if she is that scared?”

“So scared but focused enough to record lmao.”

“That spider is smaller than a pinky. It would’ve been obliterated if it was stepped on. There was a woman driving with a spider the size of her head dude.”

One Australian found Virginia’s reaction ridiculous because spiders in America are nowhere near as large as they are in the continent Down Under.

“That spider is far from huge. Feel free to come over and borrow a cup of concrete to help you harden the f**k up. Just mind you close the gate on the way in so our dinner plate-sized guard spiders don’t get out and eat the postman again. This is the 8th new postie we’ve had this month.”

Not everyone is able to keep their cool around spiders. Spiders are among the top fears in the world alongside snakes, death, and public speaking.

If you were driving and saw this spider tagging along for the ride, how would you react?