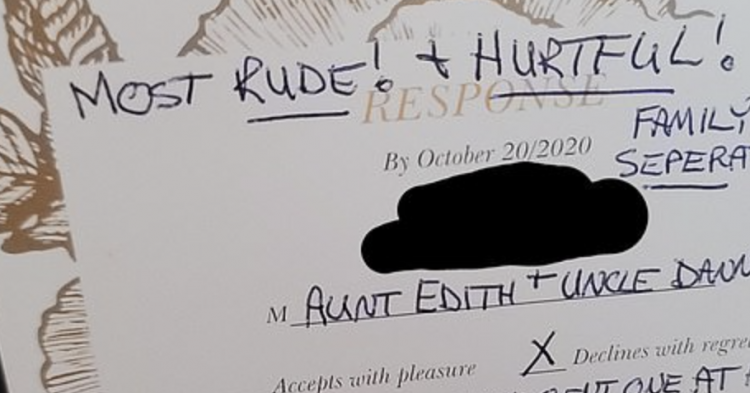 Getting married in the time of COVID-19 is not easy. The added restrictions on large gatherings and events make it much more challenging for brides and grooms to plan a wedding that is inclusive and fun. Unfortunately, gathering sizes have been reduced, and weddings are not as large as they were. That’s one reason it is so important to get vaccinated for the coronavirus – so we can get back to normal life again.

However, one bride-to-be received a shock after Aunt Edith sent back her wedding RSVP. Instead of Aunt Edith simply letting the bride know whether or not she could attend, the crazy aunt scrawled an angry note all over the wedding invitation. She wanted to let the bride know that she was very disappointed that she would not be getting a plus one to join her for the wedding. 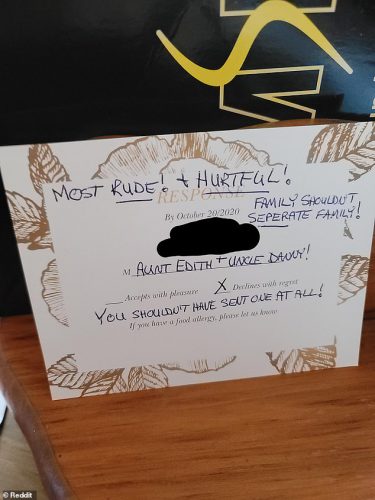 “Most rude and hurtful,” the angry woman wrote on the invite. She also wrote her partner’s name “Uncle Danny” next to hers because she was not allowed to bring a plus one to the gathering. “Family shouldn’t separate family. You shouldn’t have sent one at all,” she also wrote.

Aunt Edith not only wrote this angry note all over the wedding invitation, but she also refused to attend. She marked that she declines with regret and wants the bride to know that the only reason she is not attending is that she was not allowed to bring Uncle Danny along with her.

The bride confessed that she was forced to limit the size of her wedding due to COVID-19 restrictions. She was not trying to prevent Uncle Danny from attending the gathering and was only doing the best she could given the challenging situation brought about by the global pandemic.

When the bride shared an image of Aunt Edith’s RSVP card, people made it very clear that they felt the bride had done nothing wrong. One person simply called the angry aunt a “overwrought drama queen.”

Another woman wrote, “That’s a quick way to quit being invited to family gatherings ever again. Yeesh, Aunt Edith.”

Other people wrote about how Aunt Edith’s reaction was too much for the situation. Whether or not it was wrong to not invite Uncle Danny, people online agreed that Edith went too far with her angry rant.

“It’s possible to think the couple was rude for not inviting a guest’s long-term partner while also thinking the aunt’s reaction was over the top,” another woman explained, trying to remain neutral.

Another person pointed out that COVID-19 restrictions were responsible for the smaller wedding.

“I think COVID makes a very big difference, though. Without Covid, you should invite partners. With Covid, guest lists are very restricted.”

One woman explained that she went through a similar problem with her family.

“My aunt did almost this exact same thing for my wedding years ago. Our venue had a 120 person max limit, so I didn’t give my aunt a plus one for her flavor of the week boyfriend,” she wrote.

What do you think about this angry wedding RSVP?